Amongst some positives and some share of unfortunates another decade has past.

If I were to reborn again after high school, I would have completed it one more time (but not differently. I would have loved to play the same part all over again).

Hi to everyone to whom this note has reached (I don’t believe that deathdefier or drumsandguitar can be an email for anyone, anymore. If yes then you are still living your childhood dream and I am jealous). Most of you would be married and many enjoying the parental bliss. Life would have given you another set of questionnaire to be solved and there is no revaluation this time. I hope it is treating you well.

So how is everyone? Hope science and mathematics are still being of some help. And you are still calculating how much time it is going take to reach the destination at your current speed and google is not doing the job for you. The cells of the leaf are still helping you decide the quality of the produce you intake. Whatever you do for a living, however big or small, I hope and pray you are happy and content with it.

I am in loss words now, not being in touch for long has its aftermath.

Please take some time and try to connect with anyone who matters. It’s a small life. Please forward this note to anyone who you knew back from school so that emails are updated.

In the next decade from enjoying life to when you start looking for its meaning…we will meet again.

Man is nothing but an authentic experiment from God. He has devised you so well and the chemical composition is so damn good that he has created a living being out of those chemical compositions. As far as I know a man cannot do that, even if you provide him with any number of chemicals to play with, he cannot come up with a living being from the same. Test tube babies are still under experiment. The max you can end up is creating either a T Virus or Alice.

So coming back to the point again –  who really are you? Even if you ask this question to yourself what is the first thing that comes to your mind?

If you say that you are an achiever, a go getter, or an alpha being then that is due to the increased testosterone or estrogen supplemented with dopamine and norepinephrine in your body. If you consider yourself as a Happy go lucky person, then again its a chemical serotonin which reign with supreme in your body. If you are attracted to someone then Oxycontin and Pheromones are going haywire and if you are in lust then again its due to the testosterone, which are riding a wild horse. If you say you are a painter, musician, an artist then again its because your right side of the brain is more active or is the primary , if you are an engineer, a scientist, a data technician, then its because your left side of the brain works as a primary.  If you are deficient in dopamine and serotonin then you go into depression or maybe into Parkinson. Even if you are temporary or terminally ill then again its due to the imbalance in your body, be it insulin, cholesterol or any other ill fated chemical.

Then if body is the home of a thousand chemical compositions then who really are you and what is your real behavior? If whatever you feel or react is the output of a chemical equation then how will you really react without them? And how can you say this is really you?

Even if we say its consciousness, and that rules supreme, then again it is a state of mind, and if we have some lunacy then that also wont help. A sane person can still try to achieve a state of stability (of the mind), but what about the gifted ones?

I am still seeking an answer and one question is literally leading to another. I do not want to make this post reach nowhere. I will let you know if I reach a conclusion one day.

Many of you would like country music, and why not, it has an old world charm to it. When I get where I am going, is one of the best songs by Brad Paisley. He is one of the finest country singers we ever had (after Alan Jackson and John Denver, i am still stuck with the peppy 90’s).

This song reminds you that death is not the end, its a new beginning and there is more to it than meets the eye. There is a life afterlife and who knows it tantamount to what he described in the song.

Cartoons, right from the adorable Mickey Mouse to the Infinity and Beyond – Buzz Lightyear; from the stone age setting of the Flintstones to the futuristic Jetsons; they have made us glued to the idiot box for hours when we were kids, and are still running strong. We generally take them for granted, laugh when they act stupid, jump with joy on their antics and feel sad when they get hurt. We are awed with the world they project to us and they make us feel a part of the same. But we never realize that each character when built do not come into existence on a fly. Each one of them has a story to tell, and most of them have a shady past behind them. Why do you think Geppetto would have made Pinocchio when he himself hated kids so much that the entire town knew about it? (That is how complex human psychology is – and again that is another story).

This time I will talk about one of the most fascinating characters – Courage. Courage the cowardly dog who lives in a ranch house with an elderly couple, Muriel and Eustace. Have you ever wondered why is he termed “Courage” and “Cowardly” at the same time? According to an article – Courage is a genuine coward, but still goes to great lengths to protect his owners and that is why his name fits the character. But why is it they always come across demonic characters disguising themselves as a repairman, delivery boy, policeman or health inspector. And why is it they are only visible to the dog but not to Muriel or Eustace who act normal and show no sign of panic or dismay?

This is where we will go with a brief character sketch of the dog – Courage, after which we will be able to connect the dots.

Courage was abandoned as a puppy after his parents were forcibly sent into outer space. He was later adopted by an elderly couple who brought him to their secluded ranch home somewhere in Kansas.

Muriel was fond of the dog but was too old to take the dog outside for a walk, Eustace never liked the dog anyways and only accepted him because of Muriel’s fondness for Courage. The dog always stayed home and being on a ranch home had little to no interaction with the outside world. He knows nothing beyond a certain boundary around his home and to him nothing exists beyond that, that is why his home is at a place called “Nowhere”. All the demons in the show are normal people but to the dog they are all scary and probable threat to his owners and that is where his mind starts imagining things and he just wants his family to be safe at the end of the day. Its a dog psychology. If you see the world from the eyes of the dog probably that will all make sense. But then at the end of the day to us its just a dog fighting demons to save the owners with the funny shriek and idiosyncratic foolery.

What happens when you die? Is heaven or hell for real or is it just human imagination and a means to tie them down with good deeds. We have heard a lot about clinical deaths in which the people either see a white light or an unusual calm. But this was amazing – according to the person when he was clinically dead for a couple of minutes he visited hell and back. And that was brutal!! His life changed completely after the incident. Hell never held him loose and a piece of it followed him in his real life as well. Sounds like the final destination right? But it was much worse than that.

This is a story of Clifford Hoyt. Many say its fake, then there were others who even confirmed the hospital where he is undergoing a treatment as of current. Its the war of the words on various other blogs and forums where people want to know about the fate of the person who met with an accident at 3300 block of Maple Grove Road in Manchester in the year 1999, when his car crashed into a Mercedes coming from the opposite side. The story which I am about to share is very near to what Constantine would have actually been thru while saving others.

It is said that after the accident he was immediately taken to the hospital where panic stricked when he regained consciousness after some time. He seemed all terrified, confused and in deep shock not because of the accident but according to him he just died and visited hell. He explained all the tortures and pain that he went thru in frighting detail. Doctors suggested him to go for a psychological evaluation, but he refused to take any and was disheartened that nobody believed him what he just went thru and named it just a psychological trauma, a general aftermath of many accidents. He was released and he went back home – scared and in total disbelief.

Several weeks later Hoyt’s neighbors complained the landlord of the loud and strange music that was heard from his apartment at all times during the night. When they tried investigating they found Hoyt in this condition:

Even in this condition he still talked rational and was not pleased when they asked for a police investigation. The landlord took the photographs before he could claim for the damages and called his relatives who later suggested an intervention from the authorities concerned.

During the investigation he gave unusual explanations of demons from hell who are still trying to capture him as he no longer belonged to the earth realm anymore. He told them that his body would burn ceaselessly until and unless he plays some loud music to scare them away and then took ice to lessen the pain from the burns. He would leave the house only for a very short duration of time to get minimal supplies and huge blocks of ice to relieve himself from the pain due to burning.

Doctors concluded Clifford’s actions to brain damage suffered in the accident. He is currently undergoing treatment at the mental rehabilitation facility in Maryland.

But what if the demons were real and they still follow him; stay under his bed where he sleeps.

What you see, depends not only what you look AT, but also on, where you look FROM 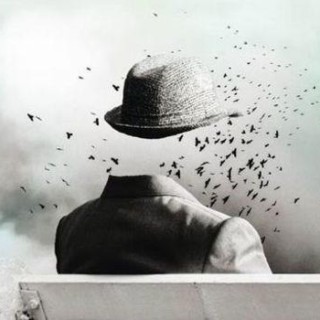 I am a writer by heart. I am a story teller. I am a father of a beautiful angel and she is the center of my world. I mostly write about things that move me, astonish me, make me wonder about life and am hurt when I see different facets of people. Times are changing, I am getting older and am experiencing life with each passing day. I am always in search of the absolute truth and the real essence of life. Probably I will find my solace one day.